It is much harder to insulate a window than it is to insulate a wall. In the summertime, windows can also absorb and trap excess heat from the sun, leading to higher cooling loads. But people like to see outside (go figure!) so, as much as an HVAC designer might want to do away with windows, they are (happily) here to stay. With this in mind, many researchers and companies have been working hard to improve window thermal performance. Here are three futuristic technologies that could make windows much more energy efficient.

The first of the three technologies, superwindows, is arguably the most developed. Superwindows are multi-layered windows that have significantly higher R-values than typical windows. LiteZone™ Glass Inc., a company based in Edmonton, Alberta, has developed a superwindow design that is only slightly more expensive than typical triple-glazed windows. LiteZone™ windows are constructed with two layers of glass separated by multiple thin-film plastic layers, with each layer creating a separate air space. The higher the number of film layers, the higher the R-value. Adding 8 film layers can take the R-value of a double glazed window from R-2 up to an astonishing R-19.2. Using plastic film instead of glass layers allows the weight to be much lower, and LiteZone™ windows typically weigh less than triple-glazed windows with three glass layers.

A vapour barrier at the edges of the glazing units allows air to enter or escape the glazing unit so that the air pressure inside and outside of the window can continually equalize as the temperature changes. This pressure equalization prevents “kissing” of the glass and film layers. Fibreglass spacers are used to separate the layers of glass and film and contain a desiccant. The fibreglass spacer improves thermal efficiency, and the desiccant prevents condensation from forming in the window. Since the glazing units don’t have to maintain a conventional pressure-tight seal, LiteZone™ claims that their windows last up to three times longer than typical sealed glazing units. Overall these superwindows have very high R-values, slightly higher costs, thicker glazing units, and longer lifespans than typical windows. Because of their high R-values, these windows can equal a wall in thermal performance. While overheating would still be possible due to solar gains, multiple low-e coatings can be used to minimize solar heat gain.

The second technology is smart glass, which is a commercialized but expensive technology. Smart glass (or switchable glazing) can dim or completely black out a window. A company called Smart Glass International, based in Ireland, uses a technology called suspended particle devices (SPDs). SPDs use nanoparticles suspended in a liquid between two conductive films. When an electric field is applied to the window, the nanoparticles align, allowing light to pass, and when the field is removed the particles become disorganized, blocking the light. The field can also be applied partially, allowing for intermediate blocking of light, creating a dimmer switch on the window. This dimmer switch can be used to reduce glare and solar heat gains in the middle of the day, or to provide privacy at night. 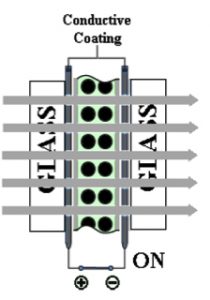 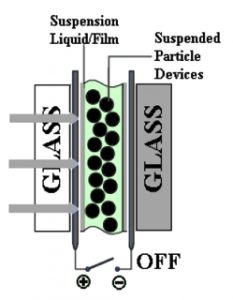 Smart glass can be connected to a building automation system and can be used to dim or brighten windows to continuously meet energy and lighting needs. Smart glass requires 7 Watts of power per square metre to maintain the electric field, and this power requirement should be balanced against the potential energy savings due to better control of solar gains and light levels. Smart glass can be used to reduce building heating and cooling loads substantially and improve occupant comfort.

The third technology, transparent solar panels, is still in the pre-commercialization phase. A start-up in California, Ubiquitous Energy Inc., is creating solar photovoltaic glass that is completely transparent to visible light.

The panels are comprised of organic salts embedded in plastic panels. The salts absorb both ultraviolet and infrared light and re-emit infrared light. Due to internal reflection, much of the light emitted by the salts is trapped in the plastic panel and reflected until it reaches the edges. Solar PV panels placed at the edges of the panel absorb the infrared light and convert it to electrical power. Since the salts are transparent to visible light, the plastic looks as clear as conventional glazing. Ubiquitous Energy expects that once the product is commercialized an efficiency of 10% is possible, which would be similar to the efficiency of silicon thin film panels. Typically, high-rise buildings cannot use much solar PV to generate electricity, because the roof area is small in proportion to the surface area of the building. However, by using transparent solar panels in place of windows, the potential solar PV capacity in high-rise buildings would increase by several times, and facilitate the design of net-zero high-rise buildings. Superwindows, smart glass, and transparent solar panels are three ways that windows could improve the efficiency of buildings. Superwindows reduce heating loads with much higher R-values, smart glass reduces heating and cooling loads through effective management of solar gains, and transparent solar panels enable much greater solar energy generation in buildings.